Christmas is all about children but it’s easy to forget that not all children are lucky enough to live in countries where games and toys and too much to eat are seen as normal.

Thankfully we are in a position to help make Christmas a time of happiness for the children we work with – a time when they can forget, even if it's just for a little while, the hardships and challenges of everyday life.

This year Globalteer’s community projects in Cambodia, Peru and Colombia enjoyed all kinds of celebrations to mark Christmas and the end of another year – some very traditional and some…not so much!

As ever, it was not only the children who had a whale of a time with staff,volunteers and project supporters all throwing themselves into the spirit of things too. Read on to find out what everyone got up to and discover what you could be part of if you volunteer with one of our community projects during the festive season next year... 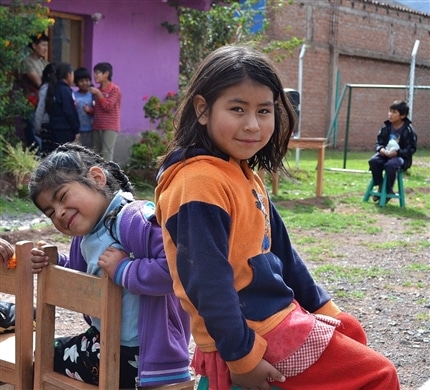 As a Buddhist country Cambodia doesn’t officially celebrate Christmas, but that doesn’t mean that much of Siem Reap, home to our Cambodia Community Project and Cambodia Sports Project, do not find a reason to celebrate.  And at one of our rural community projects it’s no different with the school marking the end of the year with a day of prize giving, games and gifts for more than 300 children.

Prizes were awarded in different age groups to children with best attendance record throughout the year. And prizes were also up for grabs to the winners of various party games including a uniquely Cambodian take on the egg-and-spoon race, using a spoon and….a balloon!

Children were also treated to fresh fruit and a glass of vitamin-enriched juice to keep their energy and hydration levels up – certainly a requirement in the heat of a typical December day and given the gusto with which they threw themselves into the games and races on offer!

Peru is a predominantly Catholic country so celebrations are a-plenty at this time of year in Cusco, home of the Peru Community Project and the Peru Dog Rescue Project.

At Picaflor House, our community project in the nearby mountain village of Oropesa the children were treated to a traditional Christmas “chocolatada", sponsored by local tour Company Southern Crossings to whom we extend huge thanks!

Globalteer and Picaflor House staff were helped by staff from Southern Crossings and a dozen mothers from the village to prepare three huge pots of spiced hot chocolate and to cut up 26 large Italian-style panetone to distribute amongst the 65 children who attended the party. Whilst the adults were busy preparing the food and drink, the playground was filled with the magical sound of the children singing traditional Christmas songs in Spanish and Quechua, the indigenous Andean language of the area.

As well as feasting on hot chocolate and panetone, the children were also treated to presents and prizes for their school work and attendance throughout the year.

When all the Picaflor House children had had their fill there was some hot chocolate left over. So, to round off a very special day, staff from the project took it out into one of the poorest parts of the village and gave it to about 30 more children, mostly from remote communities whose families have migrated to Oropesa looking for better schools and a better quality of life. All were encouraged to come and attend Picaflor House in 2015.

Find out more about volunteering with Globalteer’s Peru Community Project.

Like Peru, Colombia is mostly a Catholic country so Christmas celebrations are big in Medellin, home of the Globalteer Colombia Kids Project. This year children were treated to not one but two Christmas parties. It’s true what they say about Colombians – they sure do know how to party.

The first party took place at the Divercity Park in a Shopping Mall in central Medellin – a party organised by the city’s university students for children in the care of projects approved by the Government’s Department of Family Wellbeing. Over 2000 children attended and were treated to fairground rides as well as games, entertainment, Christmas lunch and presents from the party’s sponsors.

The second party was at the project itself and involved more games and, of course, more Christmas presents. As well as helping out at the party, Globalteer provided Christmas cookies and drinks for all the children, helping to make sure that none of them missed out on anything that the children of better-off families can take for granted at Christmas.

Find out more about volunteering at Globalteer’s Colombia Kids Project.

If Christmas is a difficult time for you to get way and volunteer, there’s no need to worry as there are plenty of other great times to come and help out at one of our projects.