Clare was a volunteer with Globalteer’s Cambodia Community Project early in 2012. She had heard  about Globalteer’s work in Cambodia from friends who had previously volunteered in Siem Reap, so joined them on a fund-raising expedition before she left England for Cambodia.

With none of them being particularly fit or sporty, she and her friends decided to do a sponsored walk. They selected  a nice canal side walk of 13 miles, thinking that it wouldn’t be too strenuous since canals flow mostly on flat ground. 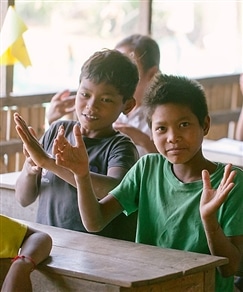 They billed it as a “half marathon”, and put in some training before-hand to make sure they would all be able to complete the distance. Then Southern England experienced one of its worst cold spells in decades and their route ended up under eight inches of snow. As Clare explained,

“Not only was the temperature sub-zero for the entire day, the pathways were treacherous, and it took us so long we didn’t make our final destination – a pub in Weybridge called, appropriately enough “The British Volunteer” - until well after dark. At least there was a nice crowd of friends and a few pints waiting for us at the end!”

Clare and her friends raised over £1,800 ($2,700) between them, all of which was donated to one of Globalteer’s partner projects in Siem Reap.