"It's hot, sweaty work...but seeing the animals each day makes it worth it"

Fiona is a very special Globalteer volunteer. During a break from her IT career, the 46 year-old Australian volunteered at no less than three of Globalteer’s projects – Thailand Animal Rescue, Cambodia Bear Sanctuary (where she also helped us to make our Cambodia Bear Rescue video), and Indonesia Wildlife Rescue on the island of Sulawesi. 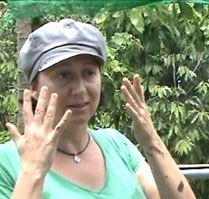 Things didn’t exactly get off to a flying start though and at one point it looked like Fiona might not actually make it to Manado, the nearest airport to the Indonesian project, first of her three volunteer placements. Thanks to her flight from Jakarta not appearing on the departures board, and the airport announcements only being made in the Behasa Indonesia language, Fiona was almost left stranded! It was only her keen sense of hearing that saved the day when she overheard someone saying the magic word “Manado” and consequently managed to find her way to the gate just in time for her flight’s departure.

After that near-miss things went mostly smoothly, although she did leave Indonesia with a few interesting anecdotes, but nothing so scary that it would put her off doing it all over again. Here is an account of Fiona’s Indonesia Wildlife Rescue volunteering experience:

“Animals are the one thing that make me smile instantly, and I was in need of a few smiles. I had done a two week volunteering placement in Ecuador once before, and was looking to volunteer with orangutans in Borneo. But that wasn’t available so I looked around to see what else there was... I typed 'animals volunteer Asia' into Google and Globalteer was one of the links that came up.

"I like Globalteer’s openness about where the money goes - my previous experience had left me with a bad taste – and I chose Indonesia as geographically it fit in well with my plans. From reading the daily duties it seemed similar to what I had done before so I thought it was a good choice to start with".

Getting stuck in at the project

“Working with bears for the first time was great... I fell in love with them... One of the most rewarding tasks at the project was making and handing out the daily “enrichments”. There were times when you could tell the animals loved receiving these things. I honestly thought the 40+ macaques would have just chucked the flower posies I made for them to one side... But every one of them picked it up with excitement.

“What did I like best about our volunteer accommodation? The food ... Mmmmmm. Joking aside, for me, sharing accommodation with a lot of under 22s was a bit challenging, but they were actually all really good. I did go off and find my own personal space for a fair amount of the down time but in general the 'kids' were a lot of fun to be around. ... I had my birthday when I was there and all the other volunteers made it one of the best birthdays I've ever had ... They sang 'Happy Birthday' in 6 languages and gave me a cake. I made some lovely new friends on the project”

In praise of the project staff

“The volunteer coordinators put a lot of effort in to make sure everything goes well. They were happy to evict the baby tarantula I discovered in the girls’ bathroom for example…During my stay there were two episodes of escaping orang-utans, but this just gave us a welcome break as we were confined to the volunteer house until they were recaptured!

"I was a little sad when it came to leaving, and I’d definitely do this kind of volunteering again, but this was the first of 3 Globalteer projects I had planned so it felt ok to move onto the next one. If I had to sum up my experience in one sentence I’d say it's hot, sweaty work, and it’s hard at times, but seeing the animals each day makes it worth it.”