The project's two orangutans, Bento and Is, were seized from smugglers by local authorities with the assistance of the project staff. They are Bornean Orangutans intercepted on their way to the Philippines where it is thought they were destined to be exotic pets.

Orangutan release programmes in Borneo are already overwhelmed and there would have been nowhere else for these animals to go other than permanently into the care of the sanctuary. 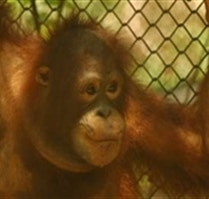 ‘Is’ is thought to have been just one year old when rescued and was hand reared. Now about eight years old 'Is' remains one of the major personalities of the sanctuary.

'Bento' is about ten but with his slow upright walks around the enclosure he would have you believe he is an old man. The orangutan keepers are currently engaged in building the animals’ trust until such time as they will be taken out on a daily basis into the mangroves.

Volunteering with orangutans is surely one of the highlights of this project.

Meet BM, one of the many macaques at the sanctuary. Macaques, who are from the cheek-pouch monkey family, are endemic to Sulawesi. The Black Crested Macaque (Macaca Nigra) is critically endangered and a big part of the sanctuary’s rehabilitation programme. The macaques, such as BM, have been confiscated from animal traders, and some have only known a life chained to a tree with no contact apart from the torment of humans. Usually macaques are quite young if poached for the illegal pet or zoo trades, but there is also a domestic bush meat trade and those animals are typically older.

The macaques are currently all undergoing rehabilitation to form natural groups as they would in the wild. Feeding is done to promote foraging, and the high frequency of feeds throughout the day helps to maintain their natural behaviour and minimise unnecessary competition.

Binbin and Bonbon – The Malaysian sun bear is the smallest known bear, rarely weighing more than an adult man. Habitat loss combined with the bear’s popularity in the tourism and entertainment industry threatens the future of these amazing creatures.

Beliefs in some Asian countries that bears' organs promote strength and virility have led to disgusting practices such as bear bile farms. Binbin and Bonbon came to the rescue centre as cubs unable to look after themselves. Their large claws make them accomplished climbers and they are often seen trying to scale the fences of their enclosure!

Other Species at the Wildlife Sanctuary

There are many endangered species at the rescue centre, including many rare birds, primates and other wildlife. Among the mammals undergoing care at the sanctuary are orangutans, gibbons, macaques, sun bears, rusa dear, the fascinating babirusa and one of the most critically endangered primates in the world, the macaca nigra.

Over 40 macaques are in residence at the sanctuary, including the charismatic Sulawesi Macaque, which is endemic to the island.

All 5 species including the Crested Black Macaque (Macaca nigra), can be found and are currently all undergoing rehabilitation to form natural groups as they would in the wild. There are many birds which include the prehistoric cassowary, extremely rare Pesquet’s Parrot along with an assortment of exotic pigeons, birds of prey, cockatoos and several species of parrot.

There are also an assortment of reptiles which include various species of turtle and crocodiles. A rehabilitation and release program for native species is also under operation.

Please be aware that the animals at the sanctuary do change and this is just a selection of the species at the project.