The Olive Ridley sea turtle is named for the generally greenish color of its skin and shell. They are found only in warmer waters including the southern Atlantic, Pacific and Indian Oceans. They are the smallest of the sea turtles, weighing up to 100 pounds (45 kilograms) and reaching only about 2 feet (65 centimetres) in shell length. 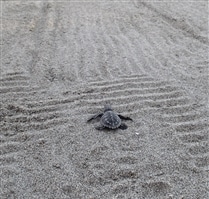 These turtles are solitary, preferring the open ocean. They migrate hundreds or even thousands of miles every year and come together as a group only once a year for the arribada, when females return to the beaches where they hatched and lumber onshore to nest. Females lay about a hundred eggs, but may nest up to three times a year. Though the Olive Ridley is widely considered the most abundant of the marine turtles by all estimates, it is in trouble due to egg poaching, fishing nets, and slaughter for their skin.

These are the most common turtles coming to the beaches where the Costa Rica Sea Turtle Conservation Project works.

Leatherback Sea Turtles are the largest turtles on Earth, growing up to seven feet (two meters) long and exceeding 2000 pounds (900 kilograms). These turtles are the only remaining representatives of a family of turtles that trace their evolutionary roots back to more than 100 million years. Once prevalent throughout the world, the leatherback population is rapidly declining in many parts of the world.  They have the widest global distribution of all reptile species and possibly of any vertebrate.

While all other sea turtles have hard, bony shells, the inky-blue carapace of the leatherback is somewhat flexible and almost rubbery to the touch.

Leatherbacks undertake the longest migrations between breeding and feeding areas of any sea turtle, averaging 3700 miles (6000 kilometres) each way. After mating at sea, females come ashore during the breeding season to nest, a night-time ritual that involves excavating a hole in the sand and depositing around 80 eggs. They then fill the nest and leave a large, disturbed area of sand that makes detection by predators difficult. They then return to the sea.

The temperature in the nest determines the sex of the hatchlings. A mix of male and female hatchlings occurs when the nest temperature is approximately 85.1 degrees. Female hatchlings that make it to sea will roam the oceans until they reach sexual maturity, when they return to the same nesting areas to produce their own offspring. Males spend the rest of their lives at sea.

It is estimated that only about one in a thousand leatherback hatchlings survive to adulthood without protection from projects like the Costa Rica Sea Turtle Conservation Project. Many leatherbacks fall victim to fishing lines and nets or are struck by boats.

Volunteers are most likely to see leatherbacks at the Caribbean project site.

The green sea turtle has a wide, smooth shell. It is named not for the colour of the shell, which is normally brown or olive but for the greenish colour of its skin. Weighing up to 700 pounds (317.5 kilograms) green turtles are among the largest sea turtles in the world, growing up to 5 feet (1.5m) in length. While most sea turtles warm themselves by swimming close to the surface of shallow waters, the Eastern Pacific green turtle will take to land to bask in the sun, it is one of the few marine turtles known to leave the water other than at nesting times.

Like other sea turtles, they undertake lengthy migrations from feeding sites to nesting grounds. Mating occurs every two to four years. They lay 100 to 200 eggs, digging a pit in the sand with their flippers, covering it and returning to sea. The most dangerous time of a turtle’s life is when it makes the journey from nest to sea as there are multiple predators that prey on hatchlings.

Green sea turtles are listed as an endangered species, despite this they are still killed for their meat and eggs.

These are mostly found on the Caribbean coast.

Hawksbill turtles are found throughout the tropical waters of the Atlantic, Pacific and Indian Oceans. They avoid deep waters, preferring coastlines where sponges are abundant and sandy nesting sites are within reach. They are quite small growing up to 45 inches (114 centimetres) in shell length and weighing 150 pounds (68 kilograms) in weight. Their strikingly coloured carapace is serrated and has overlapping bony plates. Their tapered heads end in a sharp point resembling a bird’s beak, hence their name. Another distinctive feature is a pair of claws on each flipper.

Like other sea turtles, hawksbills make incredible migrations in order to move from feeding sites to nesting grounds, normally on tropical beaches. Mating occurs every two to three years.

Hawksbills are a critically endangered species due to poaching for their stunning shells and flesh as well as capture in fishing nets.