“If you are thinking of going to the Thailand Elephant Sanctuary, then make sure you do!”

Emma is a Pharmacy Technician who volunteered at Globalteer’s Thailand Elephant Sanctuary in August 2015.

Here, she talks about her experience helping to take care of the elephants at the sanctuary, and also learning more about these magnificent creatures. 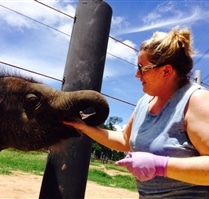 After going through many websites I chose Globalteer because they seemed the most genuine and professional and had good reviews from previous volunteers.

Helping at the sanctuary

We prepared food for the elephants, showered them, walked them, provided enrichments and cleared up a lot of poo! I was also involved with the vet team and helped treat an elephant for a skin fungal infection where I had to moisturise the elephant (it took ages)! Every other day was harvest, and we would fill up a truck with banana trees for the elephants, which was physically hard work and not for the weak hearted.

I was also involved with the dogs, and once a week I did ‘doggie duty’, which was shampooing and showering the 15 dogs at the sanctuary as well as feeding them.

Working with the elephants

Having hands on interaction with the elephants was amazing! I can’t imagine anywhere else where you would be able to do this in a safe environment for both volunteers and the elephants.

My favourite elephant was Boon Mee. I looked after her as team leader for most of my second week, and she is so gentle and friendly and gives you a big smile after every mouthful of food that you give her. She is very clever and knows when it’s feeding time, so she stands as close to the elephant kitchen as she can, looking in and starting to flap her ears and wave her trunk!

My main concern before starting at the project was being a solo female traveller, but as soon as I arrived this was a distant memory as most of the volunteers were also travelling alone and I felt completely safe. I ended up meeting some amazing new friends from all over the world, and we are even planning another trip next year together! Since all of us were travelling alone this was so nice.

If you are thinking of going then make sure you do – it's a totally hands on experience and without a doubt the best experience of my life!