Being a Vegetarian in Cusco - Top Tips

Evie from the UK was raised a pescatarian and has also experimented with flexible veganism, deciding on being a vegetarian largely due to her love of cheese! Having recently finished interning with Globalteer, she is sharing her advice for living in Cusco as a vegetarian. 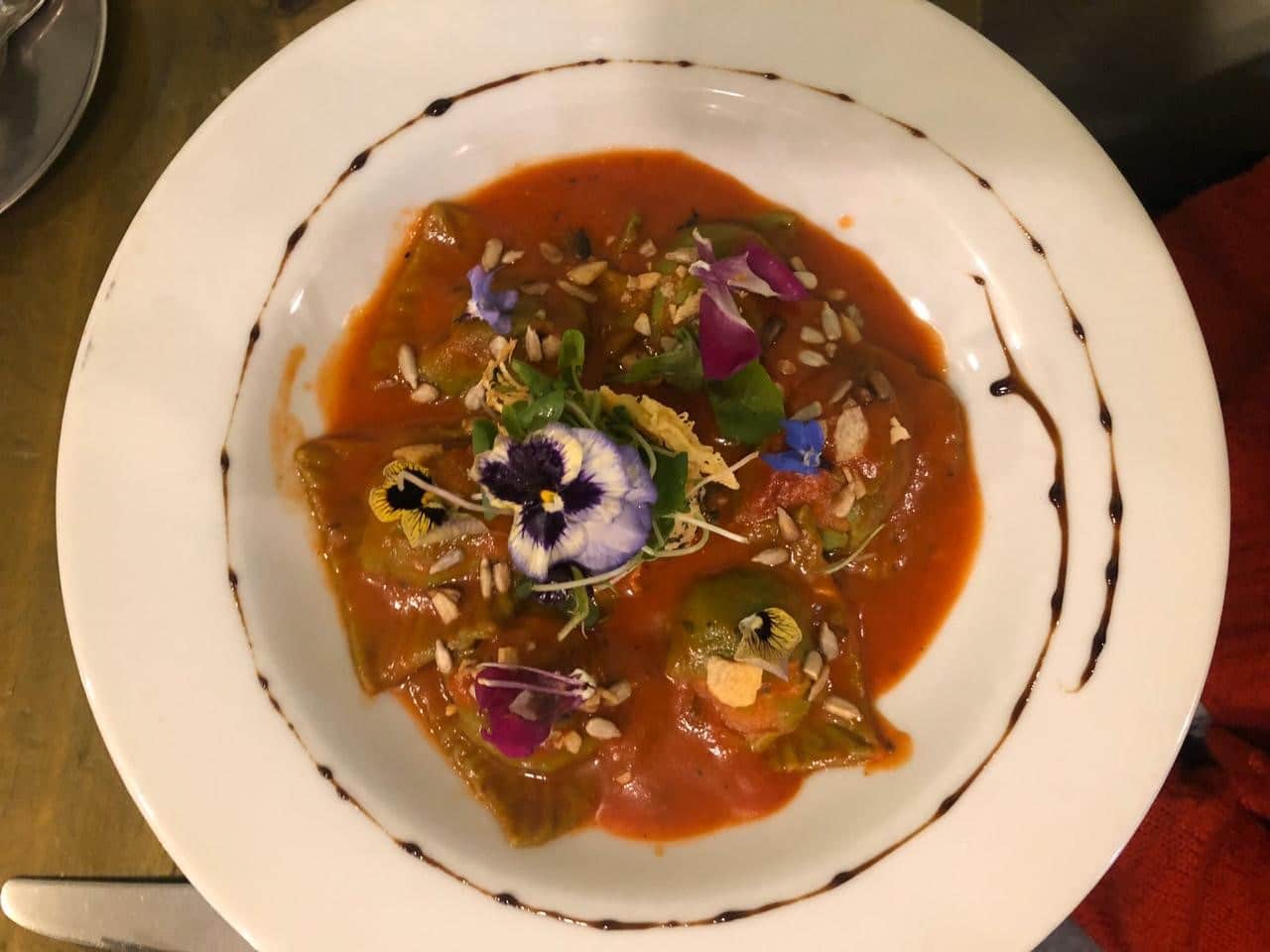 "In this article I’ve shared my experiences and offered some advice to vegetarians thinking of travelling abroad, particularly to Cusco in Peru. I’ve been lucky enough to travel fairly extensively. I’ve visited countries in Asia, Europe, Central and South America. Most of the time, travelling and being vegetarian works fine. Sometimes eating out can be difficult, but that shouldn’t put you off travelling. Read on to find out ways to make veggie life abroad easier for yourself!

This is my number one piece of advice for vegetarians abroad! Be patient. The most important thing when travelling is that you respect the people and their culture. Vegetarianism isn’t common in some parts of the world and you need to find a way to respect that, without compromising your values.

In some places, like India, I found being veggie can be related to higher social classes, where people can choose not to eat cheap meat. However, in parts of South America, sometimes people simply couldn’t understand why I wouldn’t want to eat meat (“pero es muy rico?!”). This caused confusion and resulted in repetitive and limited options when eating out. In Southern small-town Colombia, think rice, beans and eggs, over and over again. It’s a dish I enjoy, but not 3 times a day. 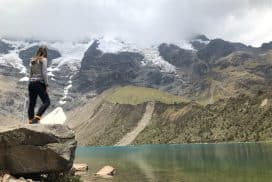 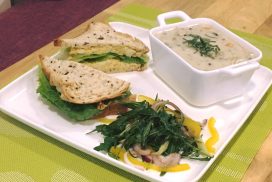 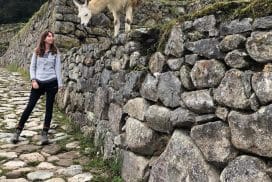 Be aware of cultural differences

Often, I experienced that local people in Central and South America understand that I don’t eat meat just fine. But they’ve assumed by meat, I mean red meats like beef and pork, so they offer fish or chicken instead. If you’re travelling abroad, you should try to learn basic greeting phrases in the local language. Make sure to add into your vocabulary: ‘I am vegetarian. I don’t eat chicken, meat or fish’. In Spanish: ‘Soy vegeteriano/a. No como pollo, carne o pescado’.

It is very possible that when eating out, you’ll be served a meat dish, even if you told the waiter you don’t eat meat. On my travels it happened many times (only once in Cusco though), despite stating I’m veggie. On a trip to Peru in 2017 it happened three times in one meal! I’m aware ‘distressed veggie finds chicken foot in soup AGAIN’ isn’t exactly front-page news and many of you reading this could be thinking ‘oh, cry me a river’.

Yes, it might not be a huge deal to some, but it can be shocking and unsettling. Especially if it’s the first time that has happened and if you have either never eaten meat or not eaten it for a long time. Also, if it’s a type of meat you’re not used to seeing (for instance a local delicacy, like chicken feet or guinea pig in Peru). And honestly, if you’re hungry and you’ve been looking forward to your meal, it’s downright frustrating! (Those of you prone to getting ‘hangry’, take note). So, be patient. Don’t let it get you down, it’s all part of the learning curve that is experiencing foreign cultures. There are way more highs than lows when it comes to trying local food, I promise!

Wise up on where you’re going

First things first, do the groundwork. Find out about the country’s cultures and cuisines and try to know what to expect. This for me is super exciting; you can learn about traditional dishes which shine a light on countries’ climates, geographies, histories and societies! Asking people you know who have visited the country, consulting online groups or forums, reading blogs, and scouring recipe books can all be great ways to understand a cuisine. You’ll find out about new dishes to try, and you might even get specific veggie friendly restaurant recommendations. Preparation is key for knowing what you’re getting yourself into and getting the most out of your trip.

I sometimes post in Facebook travel groups such as the Solo Women’s Travel Tribe when wanting a restaurant recommendation; the online community is always happy to answer. Let’s face it people love any excuse to talk about their travels! Find a group appropriate for yourself (the SWTT is a private group for solo, female travelers). If you are already or are about to be a volunteer or intern with Globalteer, join our Volunteer Facebook group to swap advice and ask questions; we’re happy to help and we don’t bite!

I own ‘Andina: The Heart of Peruvian Food’ by Martin Morales. A friend bought me this, although I imagine you can get it off most international book sites. A quick flick through tells me straight away: Peru is a meat heavy place! Veggie dishes do exist though so don’t fear, typical ingredients include quinoa, avocados, potatoes, fresh cheese, artichoke and yuca. 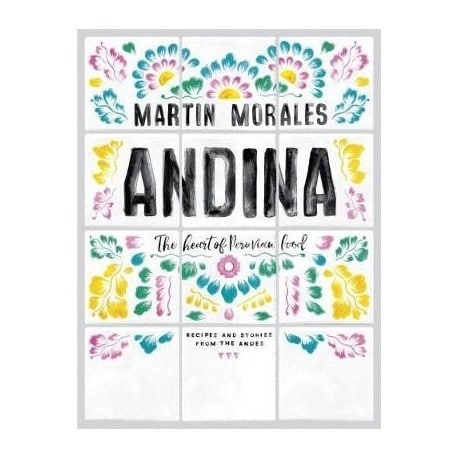 Being veggie in Cusco

I spent a month in Cusco from November – December 2019 and visited the city two years previously. I found it to be a breath of fresh air (quite literally, Cusco is nestled into the Andean mountains at 3400m) but also in terms of vegetarian cuisine. As well as tons of restaurants offering the traditional meat centered Andean meals, Cusco has a well engrained veggie scene and a flourishing vegan scene, in the main tourist areas. There really is something for everyone; one of the many reasons it’s a great place to visit.

The Centro Historico is abundant with touristy restaurants serving a blend of traditional Peruvian dishes and Western meals. Particularly near the Plaza de Armas and in the San Blas area, there are heaps of places where there will be lots of veggie options on the menu. Restaurants in the more tourist friendly areas are likely to be more expensive than restaurants where locals dine; but they’re still very affordable (see below for a price comparison). It’s also great to dine like a local and venture off the beaten track; however, you should bear in mind vegetarianism becomes less familiar at local eateries.

Ask for the ‘menu del dia’ (menu of the day) in restaurants. It’s usually a set menu, including a starter, main, desert and drink - and it’s often cheaper or the same price as main meals! Menu of the day in a touristy area: around 22 soles; menu of the day in a local area: abour 6 - 10 soles. 4 soles = £1. 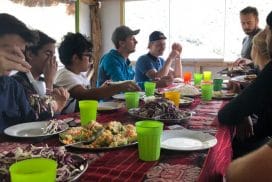 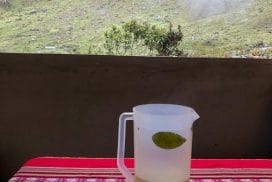 I’m sure most of you coming to Peru will be thinking of doing a hike to Machu Picchu. I did the 5-day Salkantay trek through snow-capped mountains and jungle covered valleys, crossing roaring rivers and skirting iridescent glacial lakes, to get to Aguas Calientes, the town at the base of Machu Picchu. There you can begin to climb up the stairs to the Incan citadel, crossing your fingers for clear skies and lots of llamas.

The journey totaled 100km; which makes for hungry work. The tour company I went with provided amazing vegetarian options. The pictures above show a typical mealtime set up on the hike and tea with a view! Mate de coca is a traditional coca tea used for a range of health benefits including combating altitude sickness. It’s been drunk for over 4000 years in the Andes.  If you go with a tour company, be sure to tell them your dietary requirements when you book!

To help you in your Peru prep, I’ve included some of my favorite places to grab veggie food in Cusco below. I would caution though, take your internet search results with a pinch of salt; in some places many restaurants might not yet have an online presence, or might have closed without updating their details online. Checking recent reviews can help you work out what’s still there and remember that unknown gems are often just waiting for you to discover them!

Organika – Delicious range of food and great service. I highly recommend the pumpkin soup and gnocchi!

Las Frescas Salad Bar & More – really yummy salad bar where you can make your own bowl for 15 soles.

The Churro Bar – a mostly vegan bakery with amazing churros – a must try!

Green Point – a vegan restaurant offering an extensive menu and a ‘menu del dia’ option. Pricier than other restaurants, Green Point has a sterling reputation and a tranquil garden dining space to match.

Mr. Soup – Although this is on the more expensive side of average, there is a huge range of international and Peruvian soups and creams to choose from and the portions are massive. Hands down, the best soup I’ve ever had. 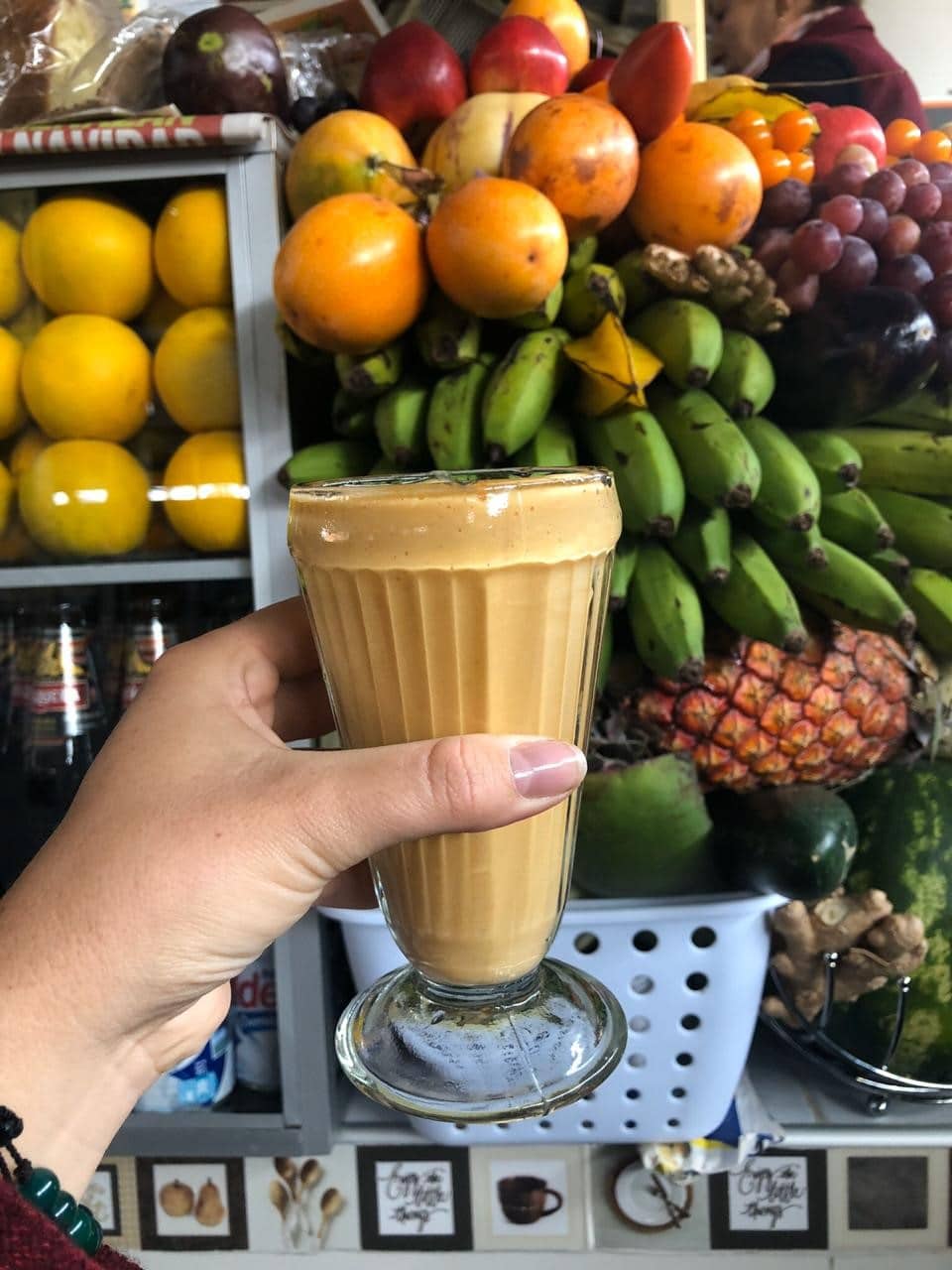 Vegetarian dishes to try in Cusco!

Guacamole – with fresh avocados in abundance, guac is a must!

Pisco sours - okay not food but this is the classic cocktail of Peru! A sweet and sour cocktail made with egg whites. Not my cup of tea, but it might be worth a try.

Looking Back on Cusco

On reflection of my time in Cusco, I realized I never knew for sure if the cheese was made with animal parts. I’m choosing to believe it was vegetarian. I think that all these labels (vegan, veggie, pescatarian, flexitarian etc.) can be a little overwhelming. If everyone can just have a conscious knowledge of what they’re eating and can be okay with it themselves, then I think that’s more productive.

If you cut out meat but buy fruit from countries around the world, you’re only harming the environment in a different way. You need to work out what’s available, what’s healthiest for your body and what’s affordable. Therefore, I want to assure any meat lovers who have read this – I am not trying to convince you to change. Do what you feel is right for you but make sure to educate yourself on how it affects our planet and the people on it. Thank you for reading, I hope you’ve found this useful and feel excited to visit Cusco. Safe travels!"