A walk through the streets of Cusco or the surrounding villages leaves visitors astounded by the number of dogs. The last official estimate puts the number of stray dogs in the city at 14,000, but more recent figures suggest it could be as high as 40,000. However, the figures are confused by the fact that many of the dogs have owners but are left to roam free.

Whether stray or owned, roaming dogs are vulnerable to injury from car accidents and fights with other dogs, as well as poisoning by people who take the issue into their own hands. As most are unvaccinated, the dogs also contract and spread painful diseases, which can cause permanent damage, if not death. Moreover, very few dogs are neutered, so the population continues to grow year on year, leaving more and more animals open to this kind of suffering. 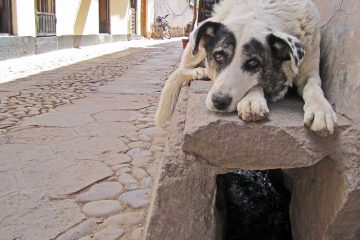 Through surveys, we discovered that the problem is worse in the surrounding villages: we have registered up to three times more roaming dogs in rural communities than in the city itself. Low levels of education, low incomes, poverty, need for working dogs and lack of access to, or money for, veterinary care are all reasons for this discrepancy. With no neutering happening in villages, dogs breed at an alarming rate and the locals deal with the puppies however they can, often selling or abandoning them in Cusco. This means that uncontrolled breeding in rural areas contributes to the street dog problem in the city.

On average, there are 3 males to every female in the villages we work in, although we have seen dog populations that are over 90% male! Whilst it varies by breed, there should naturally be approximately equal numbers of each sex, so something is happening to the females. The brutal reality is that the dog population is such a problem, that communities feel they have to take the issue into their own hands. Since there are no vets in the villages and neutering operations are expensive, the best solution they can come up with is killing the puppies, particularly the females (without females, you don’t have to deal with even more puppies).

We know that the villagers don’t want to kill animals, but the reality is that they see it as their only option. And some community authorities oblige their residents to get rid of their animals under threat of huge fines, so there really isn’t a choice. Another major problem is the local culture surrounding animal care and welfare. While the situation is slowly improving as attitudes are changing, many people still consider it acceptable to hit animals and leave them loose on the streets or tied up outside 24/7. Lack of education means that vaccinations and basic veterinary care aren’t considered essential aspects of animal ownership and the general assumption is that dogs can eat the same food as their owners. Because of poor nutrition and limited healthcare, dogs have weak immune systems, suffer from parasites and preventable diseases and die sooner. Depending on the breed, dogs should be able to live for 10 to 16 years, but only 30% of the dogs we see in the villages are older than 2!

Peruvian law prohibits the mistreatment of domestic animals, with fines for those who don’t comply, but there is little enforcement of these laws. Police may follow up on reports of animal welfare abuses, but it’s unlikely, especially in the rural villages. Additionally, the law is generally restricted to cases of physical abuse, meaning neglect is overlooked. All this means there are no repercussions for those who harm dogs, either their own or strays.

Harmful for the population

In addition to the poor living conditions these dogs experience, their presence can be harmful to the human population. Roaming dogs contribute to the spread of rubbish and diseases that can harm humans, including intestinal parasites, fleas and potentially rabies (the regional government does carry out rabies vaccination campaigns, so rates are very low). Attacks on humans by loose dogs are incredibly common: an average of 1,200 dog bites per year are reported per year. In many cases, the bite victims don’t report the attack to local authorities, but directly to the owner, which can lead to aggressive dogs being killed, often inhumanely.

It is of great importance that serious action is taken to combat dog overpopulation and to educate people around the appropriate treatment of animals, not just for the dogs themselves but for people too!

The Solution
We use cookies to ensure that we give you the best experience on our website. If you continue to use this site we will assume that you are happy with it.Ok