The Poisoning of Dogs

The Poisoning of Village Dogs

This is Luna, a four-year-old mixed breed who lives in the village of Ticapata, Peru. She was rushed to our mobile clinic last week, along with three other dogs, after ingesting rat poison. Time is of the essence with poisoning cases and our vet team fought to save the dogs' lives. A Traditional Way of Life

Even though you can see the city from some parts of the village, and the main drag through the city and its suburbs is little more than a mile away, there is a real rural feel to this village. It has grown in recent years, as people have moved here to escape the bustle of the city, but Ticapata is still a traditional, rural community at heart.

Almost every family in a rural village like Ticapata has at least one dog, to guard their house or herd sheep, and of course as companions. As we’ve written before, very few people keep their dogs confined, so they are free to wander wherever they like…which they certainly do. Neither males nor females are commonly neutered, meaning that there is a new litter of puppies or two every couple of months. But unfortunately, not everyone is a dog-lover!

Those living a more traditional way of life often get fed up with dogs fouling their fields, attacking their chickens or eating the feed meant for other animals. So, sometimes people resort to drastic measures: putting out food laced with rat poison. (This used to be a common animal control tactic, carried out by the local government; while this no longer happens in the city, it still occurs in some rural communities.) 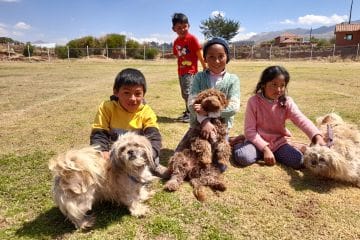 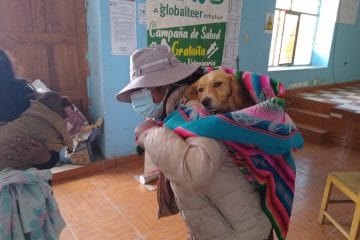 Speed is of the Essence

Once ingested, rat poison kills dogs slowly and painfully.  Rat poison can cause vomiting, diarrhea, internal bleeding, seizures and, if left untreated, death. Unfortunately, dog deaths through poisoning are all too common: three of our communities have reported at least 15 poisoning incidences to us in the last three months.

If noticed quickly enough, dogs can be treated and can survive. Members of the Globalteer team have managed to save dogs in the past, by rushing them to vets in the city. However, with no veterinary practices in the villages, few people with the means to take sick animals further afield, and limited knowledge about how to treat poisoning, most dogs don’t survive. Some people use home remedies to deal with poisoning cases (usually involving force-feeding oil/raw eggs and spraying the animals with cold water), but these actions often do more harm than good.

Luckily, the mobile clinic was in town when Luna was poisoned, so she was brought to us. Despite the best efforts of Joel, Melany and Blina, the three other dogs with her died, but after quick action and a couple of hours on a drip, Luna recovered. She is now recovering well and is back at home with her owners. 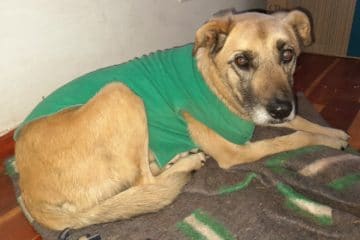 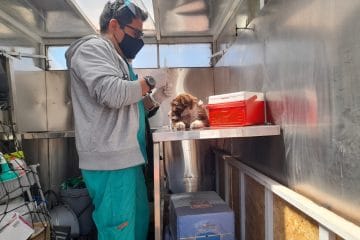 A Cheap and Effective Treatment

Most vets advise people to rush suspected poisoning cases to the nearest veterinary practice and strongly urge against owners trying to treat poisoned dogs themselves. But the reality of the communities we work in, means that at-home treatment may be the only way a dog has any chance of surviving. Our vets have decided that the best way to save more animals when they are not around, is to distribute 200 emergency poisoning kits throughout our communities and train trusted dog lovers in their administration. These kits contain the necessary supplies to counteract the poison and potentially save the dog. And the best bit: each kit costs only £3 ($4 / €3.5)!

In the long term, we need to work towards stopping people from poisoning dogs altogether. One important step towards this, is education about keeping dogs under supervision and feeding them properly, so they aren’t hungry enough to go searching for food. Neutering dogs so there are fewer on the streets is another step. Invoking new animal protection laws and involving law enforcement agencies is yet another.

PAWS is committed to working on all those things, but we recognise that these changes will take a long time. In the meantime, help us to save a dog, by donating just £3 today!

Donate Now to Save a Dog
Categories: Insights