Before continuing, please be advised that some readers may find some of the following upsetting to read, as it includes information about culling practices.

We’re now a full month into our mobile clinic programme and it has been an enlightening journey! The great thing about community projects is the conversations you can have with local people, learning more about what they need and why situations are as they are.

A couple of key themes that have been highlighted during this first month are; 1) the esteem that people hold for their dogs; and 2) the fact that everyone agrees that the dog population is a major problem.

We were in Ccorao last week, a small town of around 700 families, on one of the main roads between Cusco and the Sacred Valley. Because of its location and easy access, Ccorao has been the site of many a government rabies vaccination campaign, as well as a variety of tourism and social business projects. As we went to work on the town’s canine population, Feliciano Huaman* came up to the clinic and asked if we could come to his village, Kallarayan, just up the road. 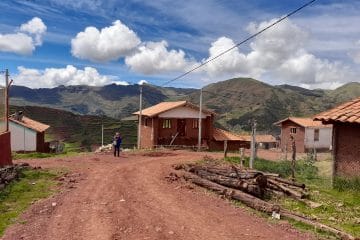 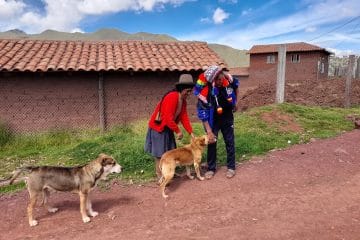 Tucked up in the folds of the northern ridge of the Sacred Valley, Kallarayan is easily forgotten by the outside world. It’s only 6km from Ccorao, but is accessed by a winding, dirt road with treacherous drop offs, that takes at least 20 minutes to navigate. Feliciano told us that, because of this, not even the government campaigns make it up to his community. That sounded like just the kind of place we should be working in, so scheduled a visit for the next day.

Kallarayan is a small village of around 100 families and it actually moved to its current location from higher up the mountain 10 years ago, amid fears that the lake above them would burst its banks. They were so happy to see us and receive much-needed attention for their dogs. We noticed a particularly high concentration of male dogs in this community; while this follows the pattern we have seen in other villages, the difference here is even more marked: of the 35 dogs we saw, only 3 were females.

This discovery led to an interesting conversation. Feliciano told us that the size of the dog population was so problematic that the community decided they had to do something about it. The solution they came up with was to aim for a population of entirely male dogs. When asked how they were achieving this, Feliciano told us that whenever a female has puppies, they are simply killing all the baby females in the litter. The fact that they aren’t killing the adult females is a sign of the love they have for their animals and the bond they have with them. However, killing female puppies was the most viable solution they could come up with. And the fact they are pretty close to their goal, in their minds, justifies their actions. 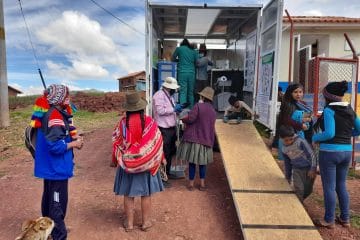 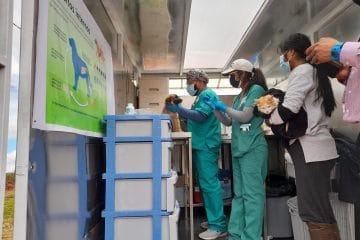 The conversation then turned to other communities nearby and how they were dealing with the dog problem. In one village, they allow families to have only one dog at a time (the assumption is that any puppies that are born are sold in the city, abandoned somewhere, or most likely, killed). Feliciano then pointed to another village we could see: “In that one, there aren’t any dogs at all,” he said. Apparently, someone from a government programme had told them that the worms in dogs’ intestines could damage their crops – the main source of income – so they culled all the dogs in the village.

We have also heard that the local authorities of some communities threaten residents with huge fines (more than a month’s wages for most) or even cutting off their water if they don’t get rid of their pets, so they really don’t have a choice.

Each Community is Different

Compare this to some of the other villages, where people turn up with 10 or more dogs, or where there are a high proportion of puppies and young dogs. In these other places, there are no rules. However, we know from conversations that the dog populations do become problematic and individuals sometimes take the situation into their own hands, putting out poison, or dealing with new litters of puppies however they can. (Note: Poison used to be the government’s way of dealing with dog overpopulation in the city, until public outrage put a stop to the barbaric practice, but it continues on a smaller scale in the rural communities.) 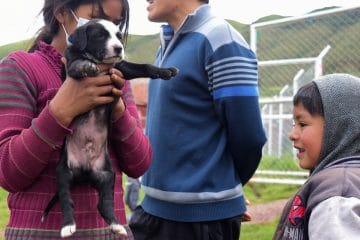 These stories of unnecessary dog deaths break our hearts, and that’s precisely why we’re here! The residents of Kallarayan were so happy when we told them that we would commit to sterilising their dogs – particularly the females – so there’s no risk of new puppies; they are relieved not to feel they have to kill more puppies.

In the neighbouring village, we can give them good, factual information and regularly deworm their animals, to dispel fears of negative effects on their crops. In other villages we can help control the dog populations humanely, through neutering and education, reducing the perceived need for drastic action.

We have to stop this cycle of killing puppies or culling whole dog populations and we can do this by offering accessible, affordable alternatives. With the PAWS mobile clinic, we can reach communities where veterinary care has previously been a luxury, available only to those in the cities, as well as help change attitudes and practices in the long term.

You can help us be part of the solution by donating whatever you can! Every little bit helps!

*NOTE: Names used are not the real names