Agee is baby Hoffman’s two-toed sloth who is currently residing at our Amazon Rainforest sanctuary in Puerto Maldonado, Peru. Agee was brought to the sanctuary last year after dogs killed her mother. She weighed just 200g when she was brought to the shelter, and the staff at the project were not sure if she would survive. Young two-toed sloths are often seen clinging to their mothers; they travel by hanging onto them for the first five weeks of their lives.

She is now 6 months old, doing well and now weighing 1 kg.  As she is nocturnal, Magali, the founder of the sanctuary says “we’ve encountered many sleepless nights over the past few months. We’re hoping that that in the future, when she is older and stronger, we’ll be able to release her back into the wild, but that will still be a while away.” 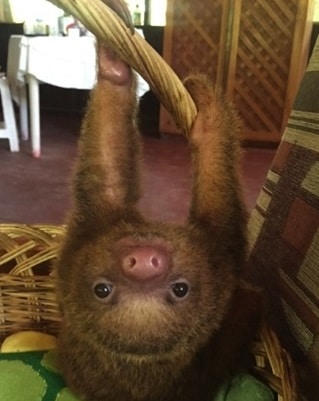 The Hoffman's two-toed sloth is one of the world's slowest mammals—so sedentary that algae grows on their furry coats. The plant gives it a greenish tint that is useful camouflage in the trees of its Central and South American rain forest home. Sloths are identified by the number of long, prominent claws that they have on each front foot. There are both two-toed and three-toed sloths. Two-toed sloths are slightly larger than their three-toed relatives. They are able to survive in captivity while three-toed sloths are not.

Life in the Trees

All sloths are built for life in the treetops. They spend nearly all of their time aloft, hanging from branches with a powerful grip aided by their long claws. Sloths even sleep in trees, and they sleep a lot—some 15 to 20 hours every day. Even when awake they often remain motionless, and two-toed sloths are generally silent. At night they eat leaves, shoots, and fruit from the trees and get almost all of their water from juicy plants.

They claws and use their strong front legs to pull themselves along, dragging their bellies across the ground. If caught on land, these animals have no chance to evade predators, such as big cats, and must try to defend themselves by clawing and biting.

This rescue, rehabilitation and release centre promotes and protects the welfare of rainforest animals and the conservation of their habitat. Volunteers are needed to assist local qualified staff with the care of the animals and maintenance of the wildlife rescue centre. Volunteers contribute to the protection of endangered animals and to preserving the unique biodiversity of the Amazon Rainforest.

Volunteers at the project work approximately 4-5 hours a day, 6 days a week assisting project staff with a wide variety of duties including food preparation and feeding the rescued animals, helping to exercise the animals and construction, repair and cleaning of animal enclosures.

If you are interested in finding out more or to apply to volunteer at the sanctuary, head to the project page.

Volunteer placement fees start from £560 / $665 for one week, including accommodation, three meals a day, pre-arrival and in country support and a donation to the sanctuary.