We grow up seeing pictures of elephants in National Geographic magazines or footage of them on the Nature Channel and think, "How cool it would be to see these amazing animals in person, and up close!" It is the exciting part of a trip, looking up the different activities and experiences you can have in another country. The website seems very legitimate and all the pictures look like the place is safe, and the tourists are enjoying riding the elephants. But is this the real picture?... 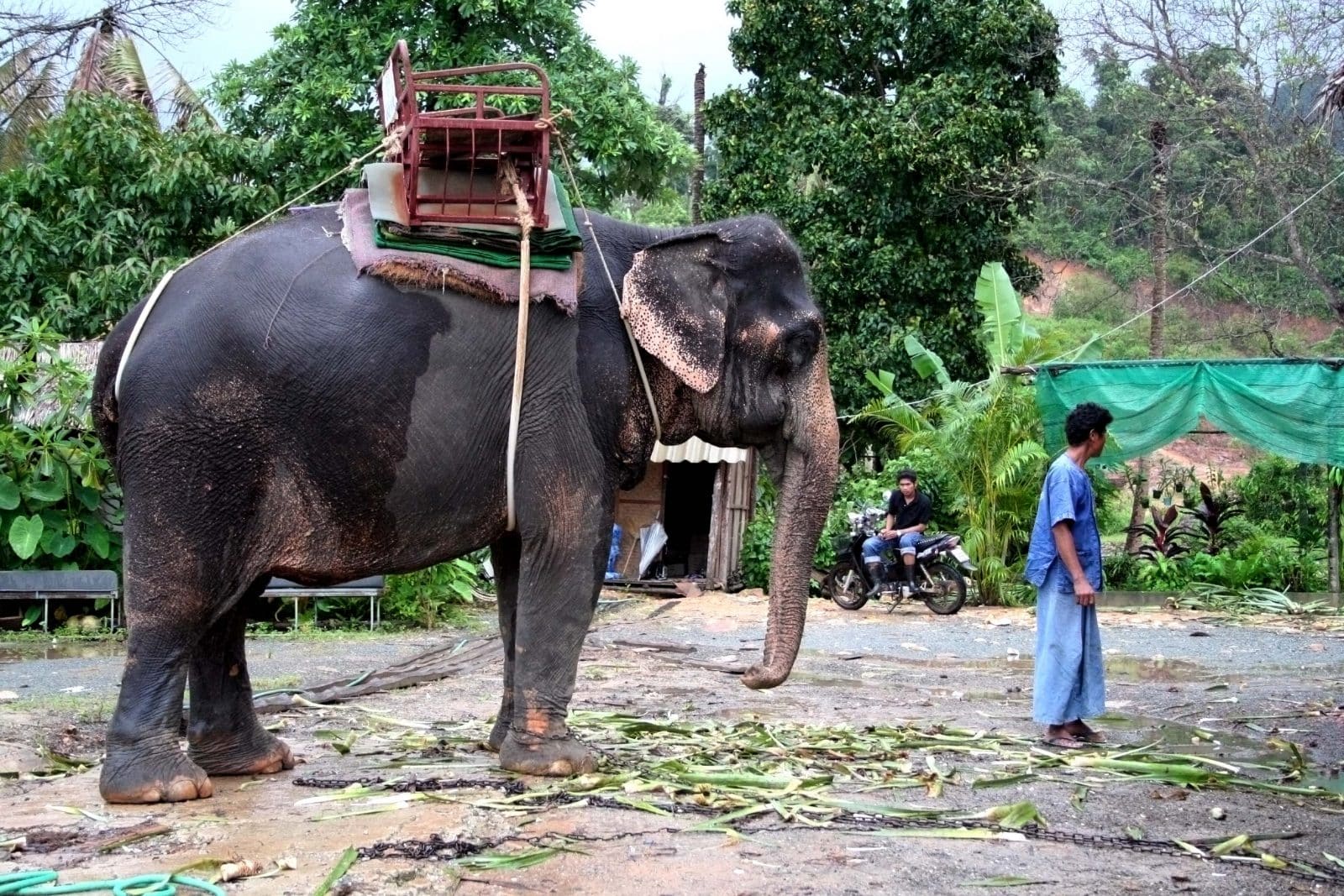 Stop and think for one second before you click the details and see which dates are available for you and your group to have this experience with the elephants. What these pictures don’t show you is the sad, dark side of these types of companies and tourist traps. What exactly is the difference between an elephant sanctuary versus elephant trekking or elephant riding? These are important questions that so many tourists ask, and genuinely do not know the answer to.

The Dark Side of Elephant Tourism

It could be riding the elephant through the jungle.
Seeing a show or circus-like performance where the elephant does tricks.
An elephant painting pictures and their ‘owner’ selling it for profit.
Any other type of ‘entertainment’ that an elephant does not naturally do.

With the number of tourists growing each year in Asia, so has the number of elephants taken into captivity and used for tourist activities. Estimates are that there was a 30% increase in captive elephants between 2010 and 2016. With that statistic in mind, it is also important to know that the Asian Elephant is on the world’s endangered species list. There are only an estimated 40,000-50,000 elephants in the region.

Most tourists are unaware of the cruel living conditions of elephants in trekking camps. If you see any picture with tourists riding elephants, elephants performing in a show or performing an activity like painting or playing soccer, it is most likely that these elephants are not residing at a true sanctuary. The elephants kept in captivity by these companies receive a poor diet, are kept on short chains, have a lack of proper veterinary care and are living in very stressful conditions. 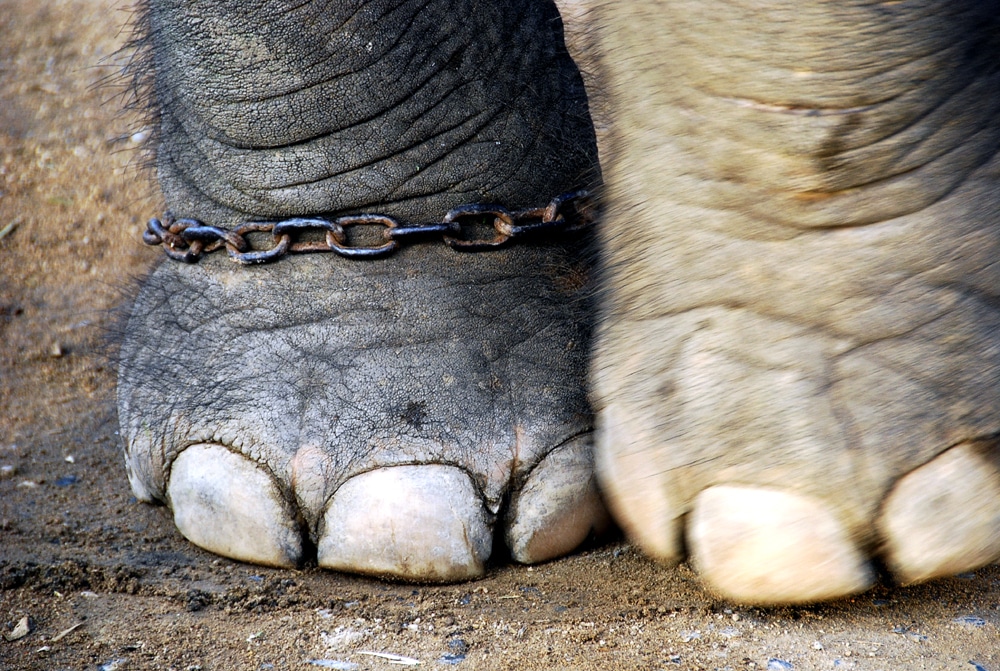 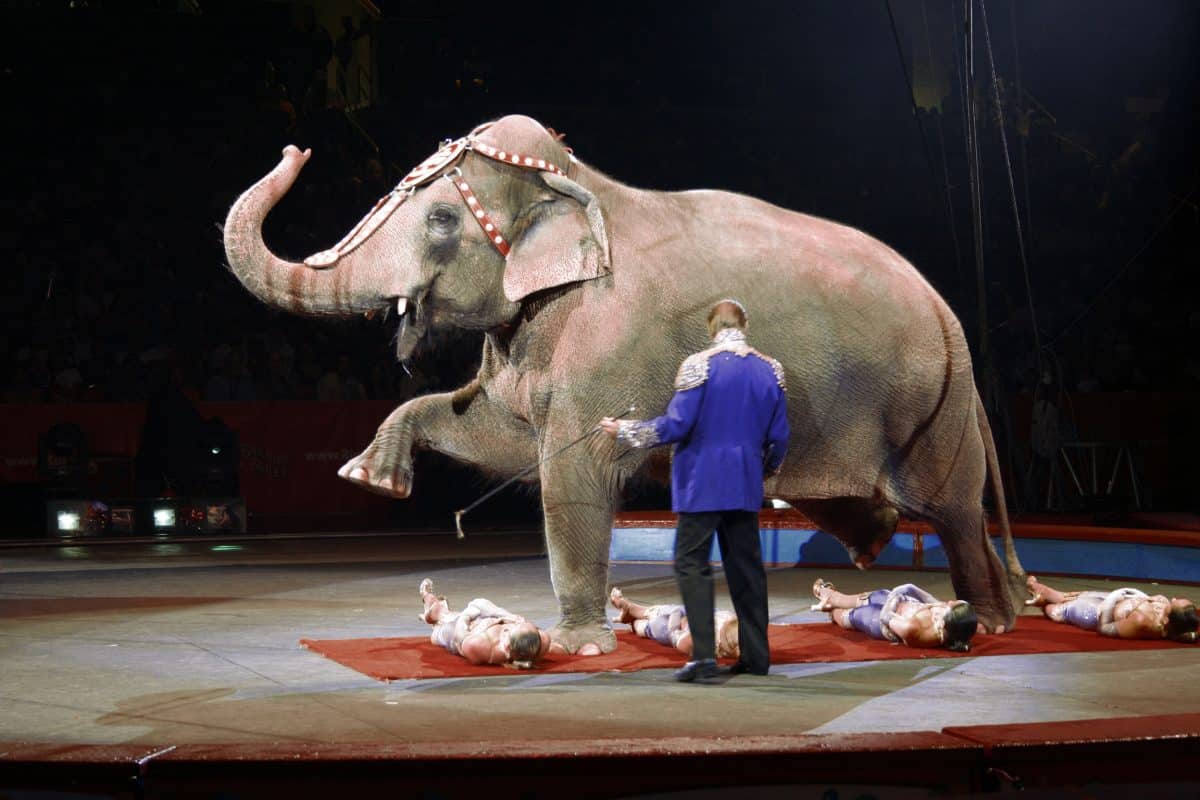 Why is this considered a bad thing?

An elephant painting a picture, or playing soccer!... that sounds so cool, so why is it considered a bad thing? Seeing an elephant painting a picture does sound impressive, but here is why it’s cruel. While the elephant trunk has the ability to hold a paintbrush and dip it in some paint, it is not something an Elephant would naturally do on a whim. It is something they are trained to do! That is the important part, because their training is abusive and causes physical and psychological damage to the elephant. This training often involves a tool called a bull hook, which inflicts pain on the elephant in order to train them to perform a certain activity or move a certain way. At real elephant sanctuaries, you may see elephants with scars from these bull hooks, inflicted before the rescue. 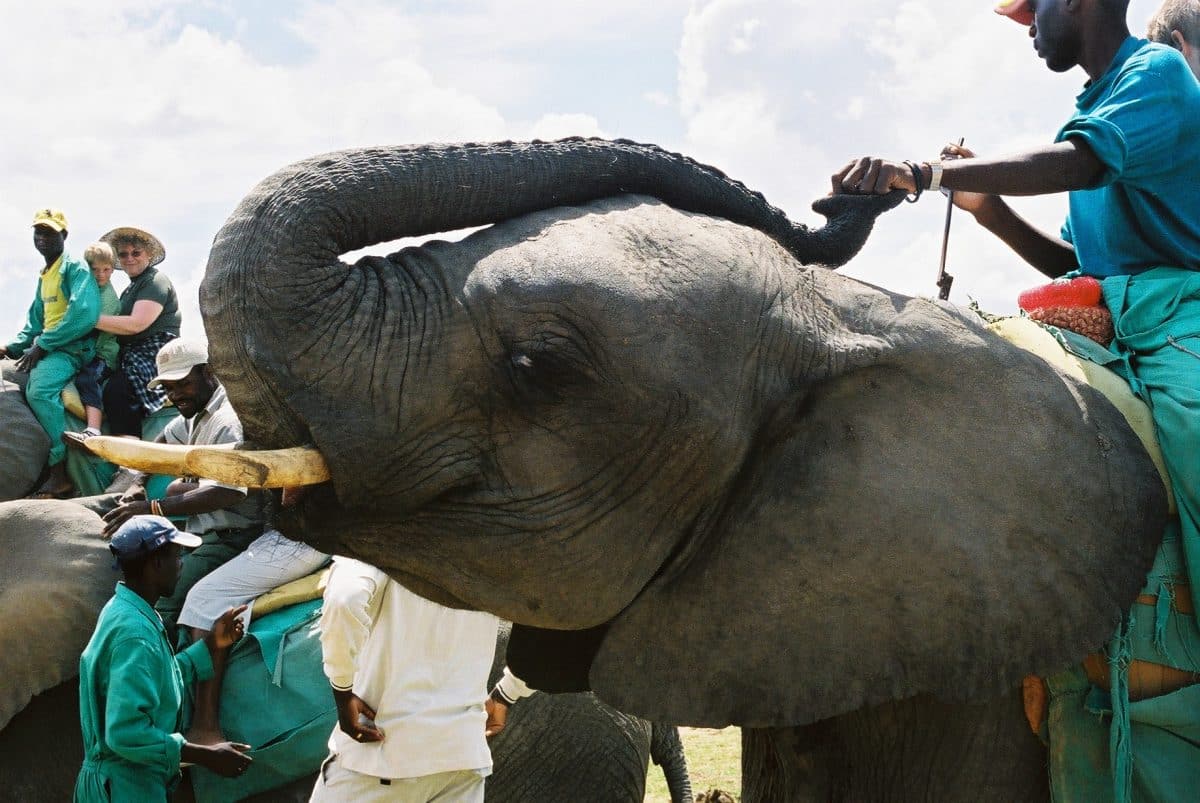 What happens when elephants are kept working in captivity?

The honest, sad truth is that they often die prematurely. Scientists estimate that elephants typically live for an average of 60 years in the wild. However, those in captivity typically live less than 45 years. What are the causes of these premature deaths at these elephant trekking companies? In addition to terrible living conditions, like being chained, abused, and a lack of food, water and clean living space, these elephants also die from exhaustion and dehydration.

There are multiple stories of elephants in many countries collapsing mid-trek with tourists on their back. The hot climates in Southern Asia mean that even elephants can feel dehydration if they are working all day in the hot sun without water. You wouldn’t think to walk around Cambodia in the middle of the dry season, going the full day without water or shelter from the sun, so why should you expect elephants to do so? One of the elephants rescued in Thailand suffered curvature to its back from years of transporting tourists. Excessive weight on the elephant’s back can cause severe damage over time.

In 2016 - Sambo the elephant collapses at Angkor Wat, Cambodia. It was 40 degrees, no wind, she had no rest and no water. Sambo was expected to carry out her full working day by carrying tourists between the temples. Aged between 40-45 years old, the exhaustion and dehydration led her to collapse and die from a heart attack.

In 2015 - A 36 year old elephant dies overnight from exhaustion in Northern Vietnam. After being chained up to a tree overnight, one of the few remaining elephants in Northern Vietnam passed away. Elephants in the Dak Lak province are made to carry tourists for several kilometres. The elephants sleep chained to trees at night, and return to work the next day. And while the number of elephants in captivity in the province has decreased significantly, all elephants born to captive parents remain in captivity until their untimely deaths.

Even before they are put to work, elephants endure cruel abuse as young as three years old. The “training crush” is when a baby elephant is forcefully taken from its herd far too early which causes lasting emotional and mental trauma. The baby elephant brutally has its spirit broken until it becomes submissive to the humans who captured it. The tourist industry fuels the brutal Training Crush.

How Can We Stop This?

World Animal Protection conducted a tourist study and found that in 2017 there was a 9% decrease of tourists (from 53% in 2014 to 44% in 2017) who think that it is okay to ride an elephant. We at Globalteer think that the number of people who seek ethical options will continue to grow. This will happen as we become more aware of what truly is happening to these magnificent creatures.

And while there are many organizations and individuals who are trying to raise awareness of the effects elephant riding, trekking and circuses have on the animals, there are also major breakthroughs when it comes to tourism companies. In 2016 TripAdvisor announced that it was banning the sale of tickets to attractions and excursions where tourists come into physical contact (hugging, riding, petting) with captive and endangered animals. This means no swimming with dolphins or petting a tiger and it means no riding elephants. Many international travel companies have joined the ban and refuse to profit from this cruel industry. 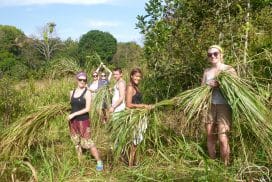 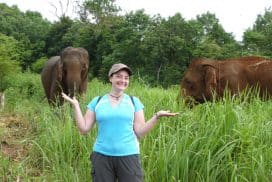 While there are lots of terrible companies that abuse elephants, there are also places that rescue these animals. Here are some stories from sanctuaries in Cambodia and Thailand.

At the sanctuary in Cambodia you can meet Ruby, a rescue elephant who came from a harsh life of hunting and logging to find peace and happiness at the sanctuary. She has also found her way into a bit of trouble by sneaking out at night into a neighbouring plantation and helping herself to bananas. Luckily she returned to the sanctuary before she did any more damage or wandered too far. To read more about Ruby’s antics read Ruby Runs Riot.

In Thailand, their mission is to educate local people, international visitors and, most importantly, local children about the need to end animal abuse and conserve Thailand’s remaining wildlife. There, Apple and Princess, a mother and daughter duo have found a home after being rescued from an elephant camp. Princess, the baby elephant was up for sale, and had she been sold before the sanctuary rescued her, she would now be working hard for tourists. 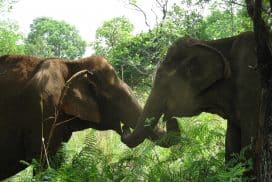 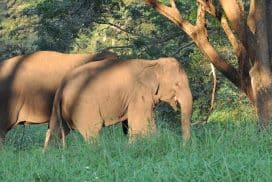 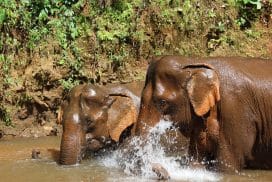 Is There an Ethical Way?

So, while you are planning your amazing trip to Asia, please remember to look beyond the pictures. Look up reviews and articles and know that your dream of helping elephants is achievable and can be ethical. There has been an increase in the number of ethical elephant sanctuaries that strive to rescue elephants from captivity, give them a clean, safe place to live and in some cases rehabilitate them so that they can once again live in the wild.

We also encourage everyone to research ethical options to have this experience at a sanctuary or a wildlife refuge. Globalteer offers three fantastic opportunities to help rescued elephants in Thailand and Cambodia. We work with local, grassroots sanctuaries who rely on volunteers to come and help care for the elephants.

Each sanctuary offers a unique experience and you are able to help the elephants in an ethical and sustainable way. These elephants have endured a lifetime of mistreatment and unfortunately cannot return to the wild. They have now found a safe home where they are able to engage with other elephants and have freedom to roam the sanctuary. They can take baths in the ponds and rivers and eat all the bananas they could ever want. The sanctuaries let elephants live like elephants. We hope you take into consideration this ethical way to experience elephants and join Globalteer in Thailand or Cambodia on your next travel adventure. In addition if you would like to donate to support our many other projects please visit our donation page.

Checklist for an ethical and responsible elephant experience in Asia.

Why not donate to support these amazing animals and their safe sanctuaries.