NGO Assistant Intern, Ruri, share his insights into how the global pandemic has effected the once lively Siem Reap:

"It is difficult through words alone to capture the intensity of Siem Reap’s ‘Pub Street’ in its pre-pandemic heyday. A vibrant mass of packed restaurants, bars and clubs flank a street that is itself swarmed by revellers dancing, drinking, or simply basking in the city’s 24/7 fluorescent haze.

Dazed eyes are drawn upwards by a lattice-like network of neon overhead, where streamers and street signs and seemingly random objects dangle interlaced from wires in some psychedelic crossover between Blade Runner and Christmas. This sensory overload of colour is mirrored in sound, as competing clubs drive their speaker systems ever harder in an endless bid to win over the backpacker horde.

The mess of light and sound fades quickly as one moves away from the city centre, yet so too fade the economic benefits heralded by Siem Reap’s sudden ascendancy to tourism hotspot. Viewed from above, Pub Street and its surroundings might have appeared a bubble of decadent excess and rapid commercial growth, situated within one of the most deprived regions of one of the poorest countries in the world. Fast-forward seven months, and it now appears that Covid-19 has burst this bubble for the foreseeable future.

It is important to emphasize that large-scale tourism here is itself a recent phenomenon. Siem Reap was among the last of Cambodia's regions to achieve lasting peace after the decades of civil war that followed Pol Pot's genocide came to a close in the late 90s. Capitalizing on the presence of nearby UNESCO site Angkor Wat, the last 15 years have seen exponential growth and by 2010 over 50% of jobs in the city were related to the tourism industry. 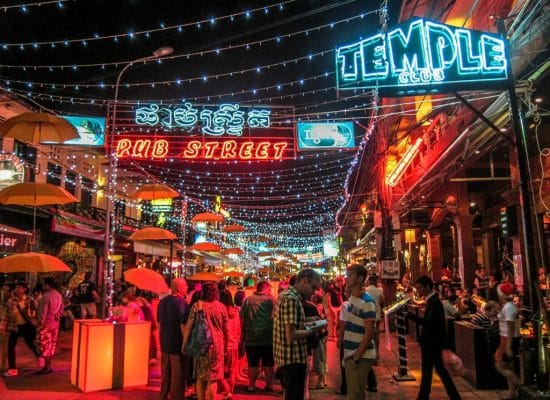 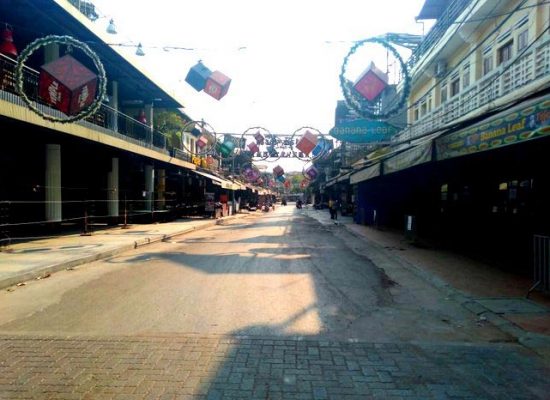 However, Cambodia effectively quarantined itself from the rest of the world in March, and for months these streets lay largely deserted. The temples at Ankgor saw a drop from 6000 average daily visitors in 2019 to mere daily dozens in 2020, whilst Pub Street’s famous ‘Ankgor What?’ bar shuttered its doors only to be looted as financial desperation mounted throughout the summer months.

Whilst the spoils of pre-pandemic tourism were not shared equally amongst the local population, the consequences of its post-pandemic loss are being felt far from the bright lights of Siem Reap. Tourism had seemingly offered the region a route out of poverty, and so came to play a central role in local development. Education became a route into the restaurant and hotel trade, traditional industries became viable once again as tourist attractions, and artisans found new audiences in emerging night markets across the city.

While this brought undeniably rapid growth to the region, it also created a system of dependency around foreign capital. When border closures stemmed the flow of tourist money, development simply ground to a halt. Plenty of NGOs trained villagers to be waiters, but far fewer trained them how to code programmes or manage businesses. How long will the restaurants lie empty for until hard-pressed families decide that their children’s time is better spent on the family farm than in the classroom?

Once lucrative lines of identikit t-shirt and souvenir stalls find small appeal amongst locals, so the night markets too now lie shuttered indefinitely. Meanwhile, affluent Western buyers have seized upon the wave of bar and restaurant closures as investment opportunities, as few locals can afford to pay rent whilst simply waiting for the tourists to return. In a cruel twist of market logic, locals continue to be priced out of the city centre without the reimbursement for this loss provided previously by the lure of job prospects. It is truly a lose-lose situation.

Even more worryingly, the bursting of the tourism bubble threatens to spark a state-wide micro-loan crisis that has long been brewing in Cambodia. A period of sustained growth had allowed individuals and families to borrow increasingly large sums from microfinance institutions, with average loan sizes increasing more than ten-fold over the last five years. Claims of over lending abounded even whilst the job market appeared stable, resulting now in a debt crisis that risks driving tens of thousands into poverty and landlessness. Governmental reluctance to provide adequate debt relief risks creating a perfect storm of economic crises that could potentially undo a decade of genuinely impressive progress in poverty reduction.

So how do we move forward from here? The pandemic has exposed a fundamental lack of self sufficiency at the centre of Siem Reap’s tourism development model, but this model was never sustainable to begin with. It should have always been clear that a region cannot be lifted out of poverty by cheap beer and backpacker garment sales alone, but there was little incentive to develop a more self sufficient economy so long as the money kept flowing. Now that the money is unlikely to flow again for some time, it is critical that the correct lessons are learned.

First and foremost, we cannot allow genuine disillusionment with tourism to damage local commitment to education. It is imperative instead to promote growth in education opportunities that aim beyond the tourism sector. At Helping Hands school, as a community-led education NGO, we are proud to have provided university scholarships for up to ten young adults every year, alongside material and social support to those pursuing vocational training. We would now ideally like to see a sector-wide shift towards vocational courses beyond the remits of the tourism-centric hospitality industry.

To facilitate such a move, the city requires significant investment aimed directly at locals, rather than that which uses them as means to profitable ends. Buying a closed restaurant and waiting out the pandemic contributes nothing, but converting a closed restaurant into a youth club, creative hub or coworking space could lay the foundations for genuinely positive change. Siem Reap won’t mourn the loss of another westerner-targeted, overpriced fried rice outlet, but investing in the city’s youth could empower a new generation of entrepreneurs to break from this cycle of dependency themselves. 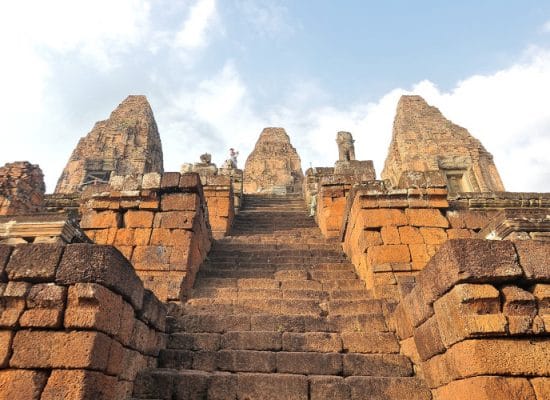 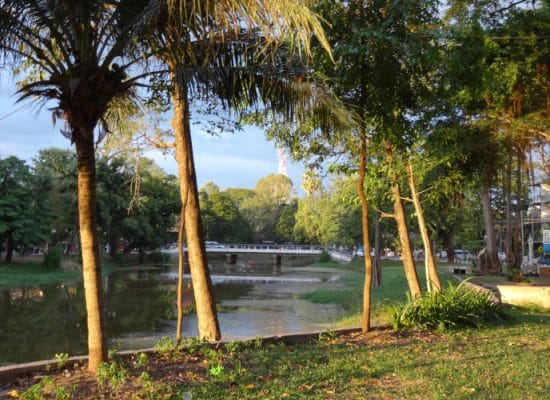 For now, Cambodia waits. Epidemiological success has come at a high societal price, and in economic terms it seems likely that the worst is yet to come. However, as the spectre of over-tourism fades from these streets and temples, there is at least some cause for positivity. Now tourist-free, the temples at Ankgor are once again repopulated by those for whom they still hold deep meaning. Corridors once crammed by traffic jams of selfie sticks are home again to families laying blessings, as the temples' cultural significance briefly trumps their consumer significance. The sheer beauty of these spaces ensures that tourism will once again play a role in the region’s future, we can only hope that this relationship can re-emerge in a more sustainable form."