Just before Christmas almost 800 children in Oropesa, Peru joined staff and volunteers at The Globalteer Peru Community Project to indulge in a bit of traditional chocolate consumption. The “chocolatada” is an essential part of Christmas in Peru when people gather together to eat panettone -- a sweet and spongy fruit cake originally from Milan -- served with mugs of spiced hot chocolate.

The first of two chocolatadas hosted by Globalteer took place on Wednesday 12th December at Globalteer’s partner library project. General Manager Jim and his wife Camilla prepared all of the hot chocolate at home and transported their cocoa cargo carefully by car to the project in a giant plastic vat. Volunteers Marlowe and Christian served the hot chocolate and panettone to over 50 children from the library project and then gave out the leftovers to passing neighbourhood kids who just happened to have their own mugs with them! 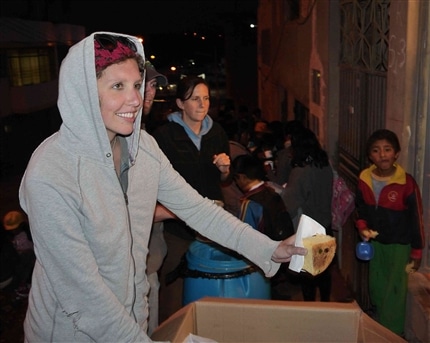 Seconds Away Round Two!

The following week, Globalteer hosted a second chocolatada at the school in Oropesa, for over 700 primary and high school students. Chocolatadas can be pretty chaotic events, and throwing one for hundreds of students required almost military planning.

GM Jim transported the supplies to Oropesa the day before the big event in his trusty VW bug - or beetle if you are reading this in the UK. Then early the next morning, Globalteer volunteers and staff met at the high school to help with preparations. As Peruvians are not quite so hung up on punctuality as Westerners, it was no big surprise to discover on arrival that the school cooks hadn’t begun preparing the hot chocolate. However, there were plenty of Globalteer staff and volunteers on hand to help out.

They carried the panettone to an empty classroom and organised an assembly line. First, volunteer coordinator Sarah opened the panettone bags and carefully peeled off the paper. Next, project manager Diane cut each panettone into pieces, then volunteers Marlowe and Goretti helped PM Diane’s boyfriend Humberto to arrange the panettone on the desks.

Whilst all the frantic preparations were taking place the excited kids were outside playing, and climbing on chairs to peer in through the windows.

After Picaflor House teacher Luis had given a speech, the kids sang a song, then one very talented student dressed in a beautiful poncho sang a traditional Huayno song in Quechua – the indigenous language - as a few of the students came up to dance with the Globalteer team.

After all of the speeches and songs, the children were treated to the hot chocolate and panettone. About 400 primary school students and teachers were served that morning, and in the afternoon the staff of local tour agency Southern Crossings – who generously donated $400 towards purchasing the panettone and hot chocolate -- prepared and distributed the goodies to a further 300 high school students.

Come and Join the Party!

Globalteer sends a big thank you to Southern Crossings and to the volunteers who helped make these special days such a success! If you would like to join Globalteer in Peru and participate in events like these wonderful chocolotadas, visit our Volunteer Peru Community Project page.  For more photographs just “like” our Facebook page or if you are already a fan go directly to our Christmas 2012 photo album.