As of 2011 the project has rescued 155 bears consisting of a mix of Sun bears and Asiatic black bears. Twenty one forested habitats have been built with various entry and access point to the indoor holding pens used when enclosures are cleaned.

All of the enclosures are extensively furnished with pools, rocks, climbing frames and a variety of enrichment toys as well as ongoing care provided by local keepers and volunteers to ensure that the bears are kept happy and healthy at all times. 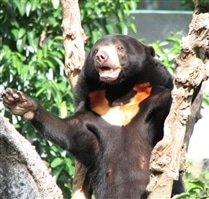 Objectives of the project

Seen by more than 300,000 visitors (both Cambodian and international) each year, the bears at the project offer a unique opportunity to educate the Cambodian public on the plight of bears throughout Asia. In 2007 the "World Expeditions Bear Discovery Centre" was completed, featuring life-size models and interactive displays to explain the vital role that bears play in forest eco-systems, plus ways in which visitors can help to protect bears for future generations.

Since 2004 the project has provided financial support to the Kouprey Express Mobile Education Unit, a unique environmental education bus which tours communities living in and around Cambodia's National Parks and protected areas. Providing lessons to school children during the day, and holding night shows for the whole community during the evenings, the Kouprey Express takes environmental education direct to those communities who hold the future to the long-term survival of bears in the wild within Cambodia.

The World Expeditions Cambodian Wildlife Hospital was built in 2006 by the project. With veterinary equipment generously donated by Steve Irwin's Wildlife Warriors Worldwide group, this hospital now provides immediate first aid and care to hundreds of wild animals confiscated from hunters and traders each year.

The project provided training to park rangers and researchers from throughout Cambodia during April 2007. The Bear Sign Survey training course bought together rangers from 11 protected areas and enabled them to carry out baseline surveys for bear populations in their respective forest areas. This information will be used to monitor wild bear populations and help conservationists focus their efforts in protecting these populations for the future.

The need for wildlife protection in Asia

Asia has an incredible diversity of wildlife and wild places. Many species are endangered or under threat for many different reasons.

Despite having signed the “Convention on International Trade in Endangered Species of Wild Fauna and Flora” (CITES)”, Cambodia is today an important source, consumer and transit country for the trade in endangered wild species and products from these species. Many threatened species of plants and animals in Cambodia and the neighbouring countries of Thailand, Laos and Vietnam are today severely negatively influenced by the trade and commercial demand for these species and products made from them.

The illicit trade attracts buyers, mainly from abroad, who capitalize on the buying power of their foreign currency and make large purchases of all types of species to be taken to their homeland to be turned into ‘medicines’ that can be sold for huge profit. Such markets are also centres of trade in animals to be sold illegally as pets, for both export and domestic sale.

People are increasingly keeping wild animals as pets, ranging from birds and reptiles to monkeys and bears. These animals are bought as babies when they are ‘cute’ and easy to handle. Animals may have claws and teeth removed to make them safer. Once these animals become too big or aggressive they are no longer wanted and become a burden to the owner. Such animals suffer from severe neglect and are frequently abandoned at zoos, temples or left to fend for themselves in the wild.

Animals exploited for the tourist industry

Tourism in Asia is increasingly being exploited by people wishing to make money by using wild animals as ‘entertainment’ and every day hundreds of animals are suffering at the hands of humans purely to make a profit for their owners.

Examples of how animals are mistreated in the name of ‘entertainment’ include:

Animals made to perform degrading tricks in animal shows.
Wild animals used as attractions to tempt people into establishments such as bars, restaurants, hotels and other tourist venues.
Baby gibbons, monkeys, bears, tigers and elephants used as photo props.
Elephants used for rides and shows in elephant camps and trekking centres.
Roosters used in the bloody spectacle of cock fighting.
Not only is the use of animals for entertainment inhumane and unacceptable from an ethical perspective, involving much suffering and cruelty, but it is also extremely damaging from a conservation perspective. Many of the animals used are taken from ever-dwindling wild populations, depleting Asia’s forests of wildlife still further.

Since 1970, Cambodia's primary rainforest cover fell dramatically from over 70 percent in 1970 to just 3.1 percent in 2007. Deforestation is accelerating at an alarming rate with overall rate of total forest loss at nearly 75 percent since the end of the 1990s. In total, Cambodia lost 2.5 million hectares of forest between 1990 and 2005, 334,000 hectares of which was primary forest.

This habitat loss combined with a rapidly growing population, steady industrialisation and booming tourism industry are major contributors to the loss of Cambodia’s native wildlife. If the effects of these changes are not addressed quickly and conservation efforts stepped up Cambodia could very well lose the majority of its endangered species in the next decade.

The Asiatic black bear and Sun bear are prime targets of traditional oriental medicine practitioners and wanton gourmands. Both are severely threatened by illegal capture for the gall bladders for the traditional oriental medicine trade and bear paws for use in medicine and in exotic and tonifying foods. So convinced are South Koreans that bear meat is nonpareil as a tonifying food that some thirty sun bears were smuggled out of Thailand to boost the performance of Seoul's athletes when the republic hosted the 1988 Olympic Games.

The insatiable demand for bear gall bladders, paws, and meat in Asia, combined with human population growth and bear habitat loss in range states, resulted in a CITES Appendix I listing of the sun bear in 1975, the Asiatic black bear in 1979 (Baluchistan spp. in 1977), and the sloth bear in 1988.

Bile, extracted from the gall bladders of live bears throughout Asia, has been used in Traditional medicine for over three thousand years. It is believed that bear bile can be effective in reducing fever and inflammation, and by cooling the blood, and detoxifying the body. An ever increasing surplus of bear bile has seen its recent inclusion in products such as tonics and shampoos that have no basis in Traditional medicine at all.

The active ingredient in bile is ursodeoxycholic acid (UDCA) and bears are the only mammals able to produce significant amounts. UDCA, however, can be produced synthetically.

Despite this, thousands of bears are housed in cruel, inhumane conditions and await the regular extraction of their bile through torturous methods.

The farming of bears for bile is a relatively new development. Farms were first established in the 1980's throughout Korea, China and Vietnam.

It was thought that this farming would have a positive effect on the wild population of bears in Asia, as bears could theoretically be bred in farms for bile extraction, leaving the wild populations undisturbed. However, with bear populations continuing to suffer from illegal hunting throughout many countries in Asia since the establishment of these farms, the evidence suggests that bear farming has had no positive impact on wild bear populations. In fact, many consumers of wildlife products believe that wild bear gall bladders are of higher quality than those of farmed bears, and so wild populations are being decimated due to the trade in traditional medicine, for meat and as pets.

Wild bear populations across the globe are threatened with extinction, with Asiatic black bears and Malayan sun bears classified by the IUCN as Vulnerable. It is believed that illegal poaching of Asiatic black bears from Cambodia and Laos still supplies wild caught animals to farms in Vietnam, China and Korea.

Bears sentenced to life in a bile farm are often kept in coffin sized cages that restrict movement and allow for easier extraction of bile. Some bears are anesthetised and bile is extracted through a huge needle, while others have metal catheters inserted into their gall bladder and permanently held in place by an "iron corset" to allow bile to drain as it is produced. Another method, the 'free dripping technique', involves inserting a rod through the fistula towards the gall bladder, which then drains its content. To prevent the fistula from closing up the wound must be constantly re-opened - usually once or twice a day.  Crude surgery to access the gall bladder and remove bile is also used. Poorly trained staff and unsanitary conditions mean that bears typically do not live longer than 3 or 4 years.

Even though farming bears and trading bear parts has been made illegal in Vietnam, the trade still exists. The Vietnamese Government has agreed to confiscate illegal bears in farms if sanctuaries are constructed to house these animals.

Luckily, several organisations are committed to changing the current situation of bear bile farming. Throughout Asia, non-government organisations are rallying for changes in policing the trade in bear products, educating the population about the cruelty of bear farming and unnecessary use of bear bile, as well as creating sanctuaries to house confiscated bears. These animals deserve a life of happiness and comfort.

Click this link to read more about the bear sanctuary.