Coral reefs are some of the most diverse ecosystems on Earth - they occupy less than 0.1% of the world's ocean surface, yet they provide a home for 25% of all marine species. As well as reef fish, there is an equally diverse array of marine crustaceans, reptiles and mammals.

The importance of the coral reef

Everything from lobsters and octopus to sea turtles and sharks depend on the reef for food, habitat and protection. Each animal plays an important role in the reef ecosystem, be it filtering water, consuming prolific algae or keeping a particular species under control. 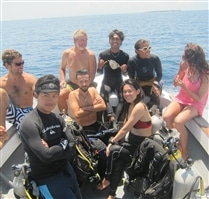 By protecting and regenerating the reefs around Semporna in the Celebes Sea, the project is helping to protect all sea life for generations to come.

Green and Hawksbill turtles are resident in the area surrounding Pom Pom Island, and during nesting season, many come on to the beaches to lay eggs (approximately 300 nests per year). The hatchlings migrate across entire oceans to feeding grounds, and are consequently at risk from many threats, from pollution, to fishing nets, poachers and coastal development.

In Borneo, the nesting season of the endangered Green and Hawksbill Turtles occurs yearly from May to September. Unfortunately, while turtles are protected, turtle eggs can be easily sold in local markets on the mainland and poachers have been known to sneak onto the island at night to steal the newly laid eggs.

Nests are easy to spot and a simple target for sea gypsies to come and claim their delicacy. To reduce this, the project patrols the island nightly, and helps to incubate any eggs found. Turtles are tagged, data is collected, and the local species are helped to remain healthy. Surveys are regularly conducted by boat, and occasionally using a small remote controlled drone aircraft.

The impact of sharks’ fin soup

Shark populations in Malaysia have been decimated by an increasingly affluent middle class in China. Hunted for their fins, shark populations worldwide have been culled at an unsustainable rate. Sharks grow slowly, mature late and produce few young over their lifetimes. They are exceptionally vulnerable to overfishing and slow to recover from depletion. In addition to hands-on replanting of reefs, the project is working towards protecting sharks in Malaysia and Brunei in the following ways:

Return to the Volunteer Borneo Marine and Turtle Conservation page.