We are delighted to welcome Umiña to the Globalteer Cusco family, although it must be said that our new addition has a few extra legs and is a bit hairier than normal. Oh, and there’s also the fact that she has a tail.

Umiña had been living at the Peru Dog Project since she was just a few weeks old, but was recently adopted by our own Globalteer staff member Meg.

Meg handles volunteer applications and enquiries for the project, and regularly visits the shelter with our new volunteers.

“Each time I went to the Dog Rescue Project I developed a stronger connection with Umiña. She has such a nice temperament and really needed a Mum to take care of her, so at first I became her godmother and took her home on weekends, but then one day I decided that I couldn’t bear for her to leave, so I officially adopted her!” 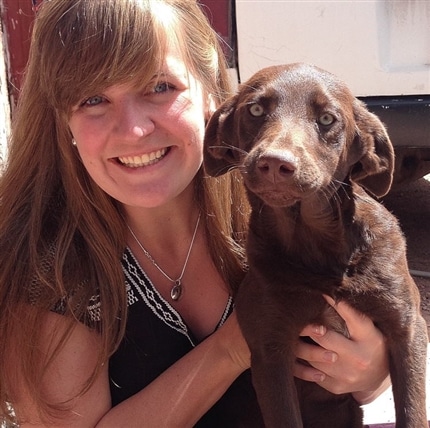 Many of the dogs at the shelter previously lived on the streets, or had been maltreated before arriving, suffering from abuse, malnutrition, neglect and improper care. This, unfortunately, was the case for Umiña, who was found near to death at just a few weeks old.

A firefighter tragically found Umiña’s mother dead in an abandoned house in Cusco. Next to her body lay her six puppies, who were still alive but sick with parvo virus, severely malnourished, and hairless because of a skin infection.

The puppies were rushed to the shelter, where staff worked hard to save the sick puppies. However, even with this emergency care three of them died. The other three fortunately survived and now are all healthy and have been adopted into caring homes.

Umiña is especially lucky because people in Peru prefer to own male dogs, so many of the female dogs at the shelter have not found adoptive homes. Perhaps appropriately then, Umiña’s name is Quechua for the women of the Incan empire who were seen as exemplary for their grace and intelligence.

For Meg, adopting Umiña has been of the best things she has done,

“The work of the Dog Rescue Project is so important for the welfare of street dogs in Cusco, as without the shelter there would be nowhere for dogs like Umiña to go, and she probably would have been left there to die alongside her mother.”

Now six months old, life for Umiña is long walks, playing with toys, being spoilt by the whole Globalteer Cusco team, and acting as a hot water bottle for Meg during the cold winter nights of Cusco. Umiña also sometimes comes to greet Dog Rescue Project volunteers at the airport, and occasionally visits the office, so if you are coming to Cusco, you are most likely to meet the Dog Rescue Project’s newest rescue!

If you want to help make a difference to street dogs in Cusco, we are looking for volunteers with the Peru Dog Rescue Project. We accept volunteers of all backgrounds, age, ability and education, and Spanish is not required for this project. Get involved today!